Blogging can, at times, feel like stepping into the unknown. You put words on paper (or technically a screen) and then send them off into the unknown. Some blogs evolve over time whereas others seem polished and ‘corporate’ from the start.

Since beginning my mindful minimalism journey, I’ve read dozens and receive encouragement and inspiration from both types. I like the sharing of current de-cluttering efforts AND the essays on particular aspects of minimalism. However I’ve become increasingly uneasy with the structure of the posts at Mindful Minimalism.  Enter stage left Katie M Anderson. Her recent post about How to come up with ideas for your blog provided the hammer to hit the nail on the head.

While I’m not short on ideas, the structure of my recent posts have included three aspects (usually) – a reflection/essay on some aspect of minimalism, what I’ve got rid of and a blog post I’ve enjoyed reading. I like all these aspects but feel I never get chance to fully explain the insights and reflections I’ve gained from the possessions I’m currently decluttering. The blog post descriptions are also not what I would like them to be. Therefore Mindful Minimalism is about to evolve.

I have decided to separate the ‘essay’ type reflections and the second part of the posts (items removed & blogs I’ve enjoyed). I’ll now be posting a weekly “Reflections and Discoveries” post containing reflections (surprise, surprise) on the items I’ve removed and the blog I’ve enjoyed. Less frequently I’ll be posting a longer essay on some aspect of mindful minimalism. The reasons are two fold. It will hopefully allow me the space to reflect more fully without a blog post changing pace half way through on to a different topic. Secondly I have a looming deadline of a book chapter that I need to write and something has got to give! For now it will be the essays.

As for the new format, here it goes… 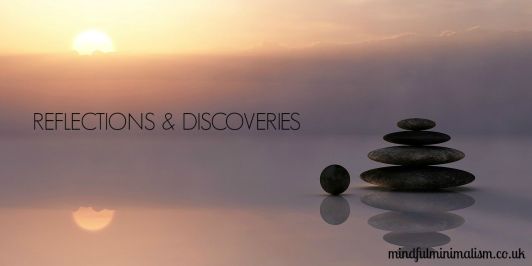 This week I’ve been having a staycation (with access to a car and nursery for my daughter). The result has been three glorious days with my wife as a couple (one of which was spent de-cluttering the attic store), visiting the Rob Ryan: Listen to the world exhibition at the Yorkshire Sculpture Park (and getting a sneak preview of Bob and Roberta Smith’s exhibition – I can’t wait to see it) and exploring toddler friendly places nearby that are inaccessible without a car. My reflections…

This week I’ve really enjoyed the exercise of writing a someday list and a today list as suggested by The Minimalists in their Someday essay. I’ve written about de-cluttering my future ‘fantasy’ self who has grand plans to fill the 60 hours in each day with crafting and who knows what else. This exercise takes the next step and while I’ve taken steps to become a present dweller, not paying attention to what I’m doing in the present is never going to get me the future I desire. Tomorrow is made in our actions of today. I recommend you try out the exercise in The Minimalists’ post to reflect on where your today is leading.